EITHER SIDE OF THE DIVIDE: New Paintings by Christopher W. Benson and Sue McNally

Christopher Benson and Sue McNally both hail originally from Rhode Island but have also spent long periods living, traveling and working in the American West. McNally, who is now completing a twelve-year cycle of paintings from all fifty states, owns property in Utah — a locale she has been visiting annually for the past thirty years. Beginning in the early 1980s, Benson spent a summer in Montana, then lived for over a decade in New Mexico and the San Francisco Bay Area. Since 2006, he has since lived with his wife and family in Santa Fe.   Each of these painters works reflect both the traditional sensibilities and contemporary awareness that such long exposure to broad swaths of the American Scene are bound to elicit. Both also share a more formally modern approach to their picture-making.

In his catalogue essay for this exhibition, the West Coast arts writer John Seed says of the two: "McNally and Benson have been friends for twenty-six years and they and their paintings are engaged in a long and wide-ranging conversation. . . Bound by a commitment to authenticity, [they] admire and support each other in both their words and practices. Both artists make works that emanate from the subject of landscape but then move towards something more abstract and purely about the possibilities of paint itself. To put it another way, both value their artistic freedom and are uncomfortable with the traditional perimeters of style."

This exhibition at the North Dakota Museum of Art feels like a fitting meeting place for a pair of American artists whose visions have ranged over much of the surrounding country. Their work descends from a common Western and European cultural background while also challenging some of the established aesthetic mythos of that heritage. In a strongly tactile approach to the surfaces of their paintings, both reflect a genuine curiosity about, and love for the physical reality of this ancient, natural place we have so long inhabited, and yet can never rightfully claim to own.

Museum Hours: Monday through Friday, 9 AM to 5 PM; Saturday and Sunday, 1 to 5 PM 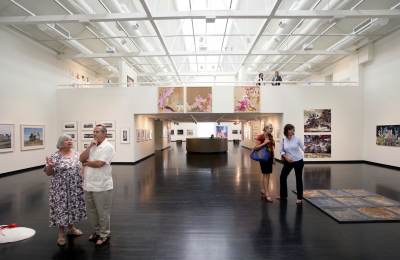